History of The Elms Retirement Residence

The land at 22 Elm Street, current site of “The Elms Retirement Residence,” was, for thousands of years, part of the hunting and fishing grounds of Narragansett Indians and later the Pequots from neighboring Connecticut. The Narragansett name for Westerly was in fact Misquamicut, which means “red fish,” i.e. salmon. The Narragansetts also farmed the land, growing corn, beans, and squash.

European settlers arrived in Westerly in 1661, and by 1669 incorporated the town, which comprised about thirty settler families and included Charlestown, Richmond and Hopkinton. These early settlers also farmed the land and took advantage of the close proximity of the Pawcatuck River where they established shipyards and fishing operations that enriched the town and raised its profile.

During this colonial era many of Westerly’s most prominent families moved to the town, including the Babcocks, the Crosses, the Utters, the Stillmans, and the Cottrells. These families each owned many parcels of land in the town, and properties passed back and forth among their descendants for generations, including much of the land along the Pawcatuck River, and in what is now downtown Westerly, including Elm Street.

In their early history, Westerly and Pawcatuck village, across the Pawcatuck River from Westerly in Stonington, Connecticut, were one locale, called “Pawcatuck Bridge,” with one post-office, one depot, and common wharves. (Today, the Westerly/Pawcatuck Downtown Business Association’s slogan is “2 States, 2 Towns, 1 Walkable Downtown.”)

The earliest occupant on record at 22 Elm was John H. Cross, who worked in the lumber industry, and was also “extensively and intimately connected with real estate improvements and general business in Westerly,” according to his obituary on May 15, 1884. The precise year when he built his house at 22 Elm is uncertain. Town records claim 1890, yet local business directories indicate that the Cross family maintained a residence there at least as early as 1884/5. 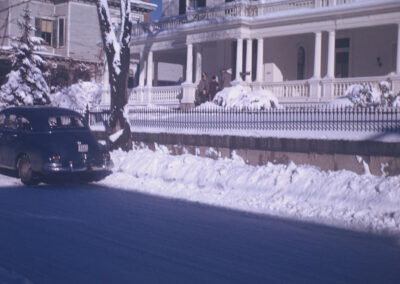 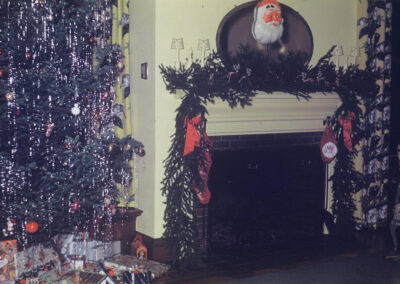 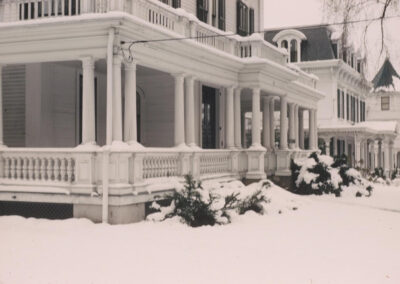 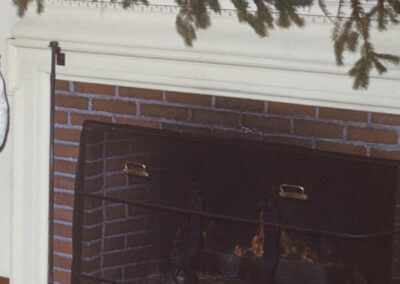 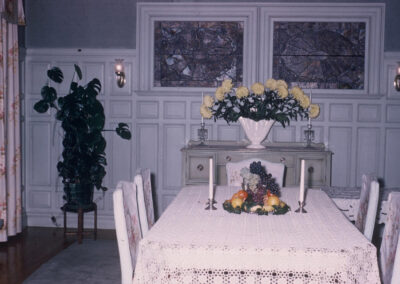 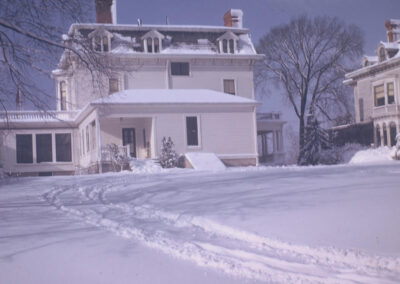 The proud, Second Empire residence – an architectural style imported from France in the 1850s and 1860s during the reign of Napoleon III – reflected Westerly’s increasing industrial wealth. C. B. Cottrell & Sons Inc. were the national manufacturers of printing presses. Calvert Byron Cottrell held more than one hundred patents and pioneered printing press technology that was a boon to magazine publishing. The Smith Granite Company, supplied granite for monuments and government buildings all across America. Accompanying this growth were commercial, religious, public and private institutions, many of them architecturally noteworthy, such as the Old Town Hall, the former Immaculate Conception Church, Christ Church, the Westerly Public Library, and the Westerly Armory. The 14-acre Wilcox Park at the foot of Elm Street was established in 1898, designed by Warren Manning, an associate of Frederick Law Olmstead.

(Click to enlarge.) This was found in one of the walls while restoring The Elms.

When Calvin Cottrell’s son and business associate, Edgar, purchased 22 Elm from John H. Cross’ descendants in 1895, the address was one of the most fashionable in town. The street’s grand houses were “born of affluence” and of a desire “to build big and stylish on high ground along what was then emerging as the street of choice,” as architectural historian Wm. McKenzie Woodward of the Rhode Island Historic Preservation and Heritage Commission observed.

The Cottrells lived at #22 for several generations until 1938, when the family sold the property to Ruth M. Cerrito, wife of Louis C. Cerrito, a prominent proctologist who moved to the area in 1933. (Ruth later deeded the property to her husband in 1942.) Not only did the Cerritos live in the house, but Dr. Cerrito maintained an office and examination room there – the first known medical use of the premises. In 1955, the Cerritos sold the building to David and Mildred Paladino. The Paladinos permitted Dr. Cerrito to continue to run his medical practice in the house by letting him lease his old office and waiting room on the first floor.

Guy Maiorano, The Elms’ founder and owner, told WCRI radio that when he first saw 22 Elm in 1985 it was in poor condition, with shutters falling off, hedges overgrown, and years overdue for repainting. Maiorano was looking for a real estate investment in Westerly and when he knocked on the Paladinos’ door they told him 22 Elm wasn’t for sale. The property was what was then known as a “sheltered care facility,” a dated term for an early model of assisted living. There were a few residents—there was no nursing—and the Paladino’s daughter and children lived on the third floor. David Paladino did the cooking. Maiorano asked them to name a price, they did, and his vision for The Elms began to take root. It started out simple: three residents, a live-in manager, good food and good care. 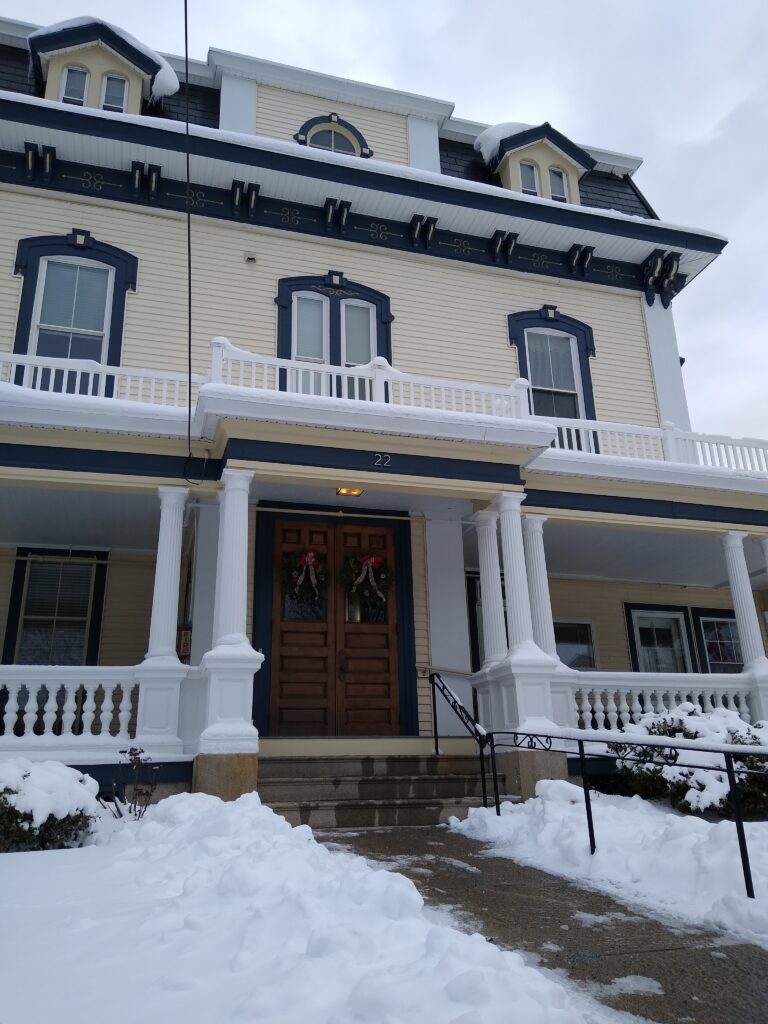 (Click to enlarge.) The Elms freshly painted exterior, just in time for the holidays.

Demand grew quickly. Maiorano scaled the retirement community up to 12 residents, and in 1990 expanded it to accommodate 56 residents. From there The Elms expanded on average every five years. In 2000 Maiorano acquired a neighboring house behind 22 Elm to build The Carriage House and establish the area’s first dedicated memory care community with 16 units. In 2004 he bought another neighbor’s house and tore it down to add another 15 units to the memory care building. In 2010 he acquired the old ambulance building on Chestnut Street to build Chestnut Cottage. It later expanded to a total of 55 units for memory care residents. In 2016 a light-filled pub, expanded fitness center and re-designed beauty salon were completed in The Elms’ main building, followed by a re-imagined Great Room with demonstration kitchen in 2017 and the elegant new dining room in 2018 featuring art work with coastal themes by noted artists.

Thirteen expansions and 35 years after Guy Maiorano first knocked on the door of 22 Elm, The Elms campus is home to 119 residents, and employs a team of 112 people, providing renowned independent and assisted living and dedicated memory care. The retirement community that Maiorano first envisioned with his own grandmothers in mind, has now served thousands. The downtown continues to thrive. Its shops, restaurants, theaters, art galleries, music and nearby beaches draw visitors from around the world. Wilcox Park, with its arboretum, is on the National Register of Historic Places, impeccably maintained and a premier location for outdoor theater and concerts. George C. Moore’s Westerly plant, which became the world’s largest manufacturer of stretch elastic for women’s clothing in the early 20th century, continues to be a major local employer. And C.B. Cottrell’s great, great, grandson, Charles Buffum, operates the successful Cottrell Brewing Company in the same factory that once housed his ancestors’ printing press business in Pawcatuck.

Enjoy the charm of victorian architecture, spacious and relaxing community rooms and outdoor spaces, a vibrant and historic downtown and local community, and award-winning care that is always close at hand.